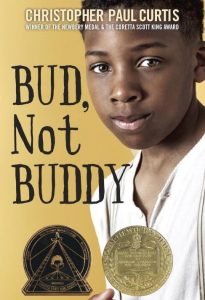 Bud, Not Buddy written by Christopher Paul Curtis is a book about a ten- year old boy who is growing up during the Great Depression. Not to mention, he is also a foster kid who goes from foster home to foster home, with his special suitcase. His suitcase contains the remaining of things his mother gave to him before she died. She leaves Bud a flier, which Bud believes is a clue to find his father whom he has never met. He goes on an adventurous journey to find his father and meets multiple people that help him on his way.

However, there are some downfalls as well. He gets beat up at the foster home, a Ticonderoga pencil shoved up his nose, trapped in a shed, cut by fish head skeletons, and attacked by wasps, but this still does not stop Bud from reaching his goal. Although he lies along the way to enhance his situation, he still comes out clean. He finally gets to Grand Rapids, and runs into his dad’s band, Herman E Calloway and The Dusky Devastators of the Depression! He finds his dad afterwards. However, after a blown out argument about who his mother was, Bud finds out that Herman E. Calloway was actually his grandfather! The ending was quite a shock, but satisfactory at that. I’d rate it 5/5 stars! 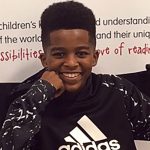 A Freshman at Grady High School

Proudest Moment: Reading over one million words for the past 5 years.

Life Goal: He wants to be a Mechanical Engineer when he grows up.

This site uses Akismet to reduce spam. Learn how your comment data is processed.

Learn about the young readers and authors in our Page Turners Bloggers & Journalists program (PB&Jers). Meet the Authors.

Page Turners promotes shared reading experiences that engage, inspire and expand students’ knowledge of themselves and the world around them.  When books occupy a central place in a child’s world of entertainment, spirited conversations, personal discoveries and lasting learning are sure to follow.

Page Turners Make Great Learners, Inc.’s mission is to expand children’s knowledge and understanding of the world, themselves and their unique possibilities through a love of reading.